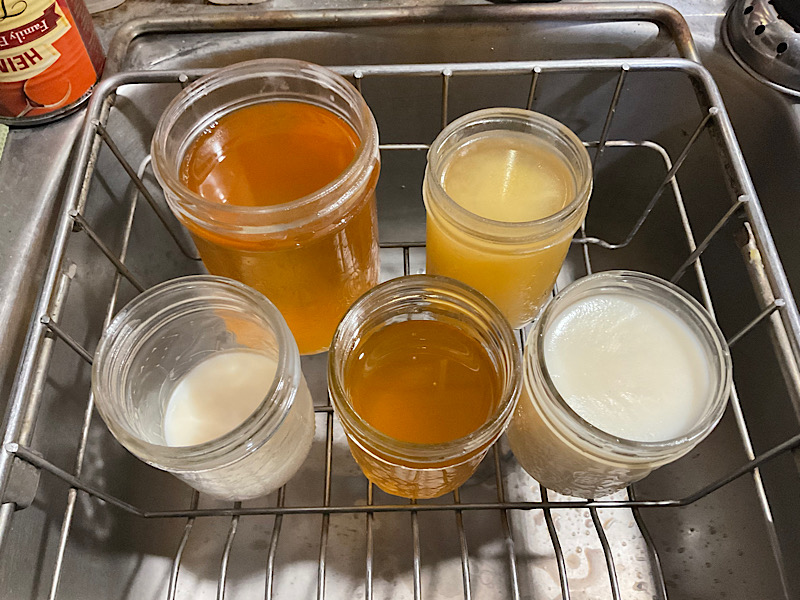 One of the side products that comes from processing Pork from Pigs is the fat! Using that Pork Fat to make Lard, or Render Lard, as it’s called, is very rewarding! While you may think it’s unhealthy…

Alton Brown, host of the Iron Chef, may disagree!
(Watch the Video on the Food Network)

“While there are a few dissenters in the ranks, most of the experts we spoke with say lard doesn’t deserve its bad rap—and can actually be a healthier fat than other options, especially for some kinds of cooking.”

The Site Hampshire.edu goes deeper into what some of the healthy benefits are…

So, by now you may be asking, but what about Crisco?
really glad you asked… Read TheConversation.com

Anyway, suffice to say, the Taste alone that comes from Foods, especially Baked Goods, made from Lard, especially Lard rendered from Woodland Pastured Berkshire Pigs like we have here at Briden Farm, is incredible!

So, let’s take a look at how we make Lard…

First you take at least a pound, or more, we used more, of Pork Fat and put it in a Pot, or as we did a Cast Iron Frying Pan. If using a pan place it in a medium oven for about 3-4 hours until all the fat has melted, except for a few light brown pieces. If using the Frying Pan method on top of the Stove, we used our kitchen wood stove, you’ll just have to be careful not to over heat it. It’s better to just use a low to medium heat as you don’t want to burn it. 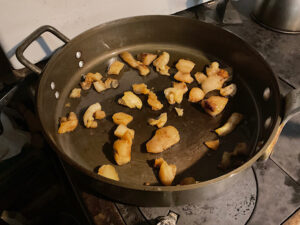 Once You see a good amount, say a cup or so, of melted liquid fat in the pan you can drain it off. Use a filter, or cheesecloth, and pour it into a Mason, or heat resistant jar. Placing a spoon in the jar may help to displace the heat. Of course you remove the spoon before letting the liquid cool.

You can let some jars cool, even if only partly filled. Then add more melted liquid when ready. I like to sort my Lard, in the liquid form, from light to dark. Some jars ending up almost pure white from the clearest liquid and others more off white to darker shades, based on the liquid and the heat O’ve applied. The area of the Pig the fat comes from also affects the final colour and taste. Use the clearest, whitest, lard for your pastries. Use the darkest coloured jars in the future for greasing pans for other meats and other foods.

After you’ve rendered, aka: melted, the remaining fat and poured it into its respective jars, sorting by colour, you’ll be left with some off white to brown crispy pieces in your frying pan. 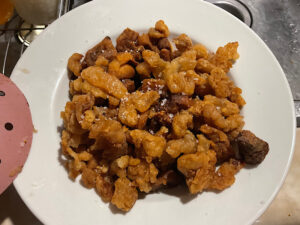 Now, sometimes we put them in a pan in a medium oven. After draining any remaining grease from them; or as much as possible. Let them dry in the oven, or at least on a piece of paper towel. You may also want to sprinkle them with some sea salt! We also add Watkins Pepper to ours! These are called Scrunchions or Cracklins, or Cracklings. They are quite possibly the best thing in snack food!