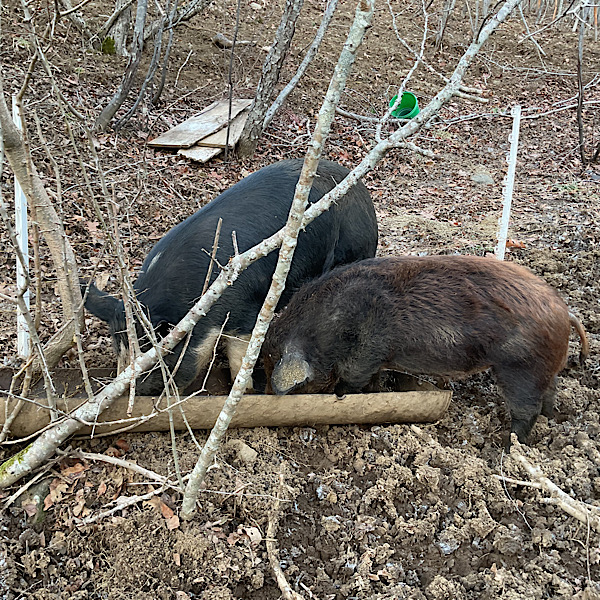 It was quite a day! As is often the way with Farming, it didn’t all go as planned or expected, but it did go well. Most of it anyway! This is the second time in about a week we’ve introduced new Pigs. First the three little ones, Elvis, Jack, and Babe to Lara. That went quite well, a little biting and a few squeals, but nothing serious. Now a week later Lara who is about 11 months old has pretty well adopted the three little ones who are about 4 months or so and weigh less than half Her weight.

At first, when we got the little ones, earlier this Fall, we’d hoped Elvis or Jack would be big enough to breed Lara, but they’re not. Not even close actually! Anyway, the first introduction went well.

So, knowing we wanted to breed Lara, but also knowing the little.boars we’re to little to do the job, we got Eugene. Eugene is a Managalisa cross who we’ve had just a few days. We put him in what was Lara’s stall in the barn. Kept him the for a few days, while we got used to each other. He’s very tame, quite friendly, and was well raised. Yet, only about half Lara’s size!

So, wasn’t sure how the introduction or the potential breeding would go!?

I certainly put myself out there in these videos! Showing, embarrassingly so, how green I really am! However, as you’ve seen in this video series, and especially when the three little pigs come to the right side of the fencing when I needed them to shows how much work and training we invest into them! I have really come to enjoy raising pigs.