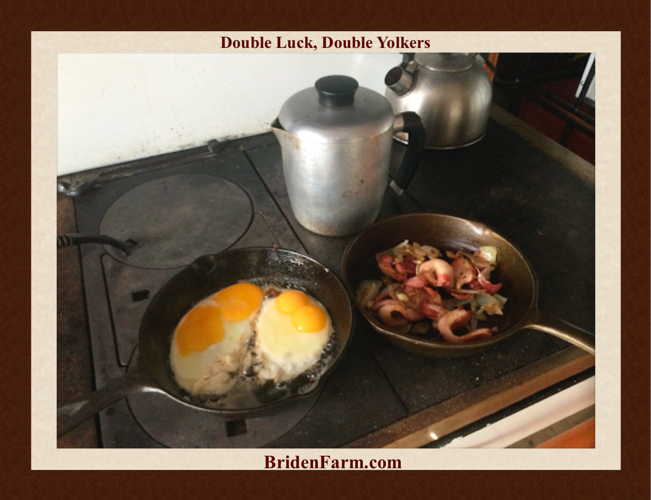 It’s no secret that Double Yolk Eggs exist, but did You know that they may bring good luck! I doubt the later, unless it’s for the Hen that laid it, and then it’s a long shot!

According to bonappetit.com, Gail Damerow, author of, Storey’s Guide to Raising Chickens, says, “It takes 25 hours to make one egg”. Which is the same amount of time it takes to create a Double Yolker!

So, while it doesn’t take twice as long, it does take a special process within the Hen! SauderEggs.com states, “A double yolk occurs when a hen’s body releases more than one egg during her daily ovulation cycle. And, just like humans, it’s possible for two — or more — eggs to make their way from the ovary and through the reproductive tract.” Obviously, those two Yolks are contained in One Shell. The odds of that happening are about 1 in 1000. So, You have to be pretty lucky to find one!

Two here in one pan, is Double Lucky, Double Yolkers, at Briden Farm!!