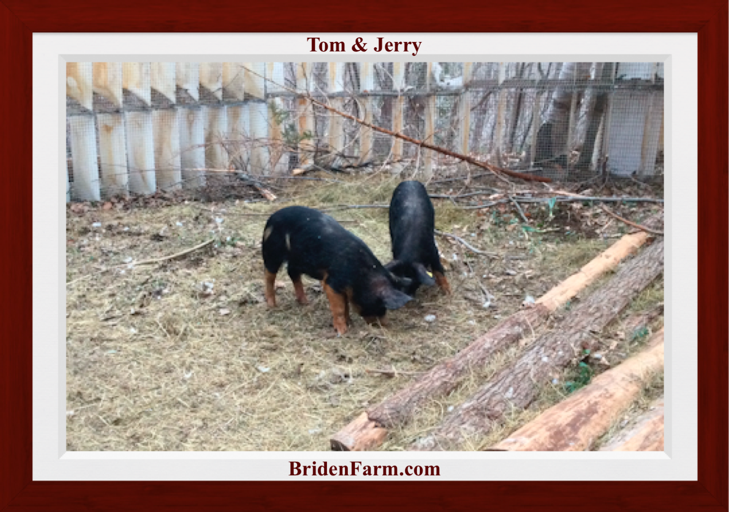 Recently we got pigs at Briden Farm, we’ve never raised pigs before, they are a mix of Berkshire and Tamworth. This Video shows us trying to coax our new Pigs, Tom & Jerry, off the Truck!

Apparently they liked their ride home! So we’re not eager to unload when we first got them home to #BridenFarm​.

Since this is actually our first time ever handling Pigs, we were somewhere between apprehensive and excited and I think the Pigs picked up on that! As a result, and because They enjoyed the ride Home so much, You won’t even get to see the Pigs in this video, but it’s pretty funny, and we think you’ll get a chuckle out of the antics! Ours, not theirs! To actually see the Pigs, you’ll want to watch our next video, Training the Pigs to eat from Their New Trough!

Now, when we picked up the Pigs, They warned us not to chase them! If they get loose, but to just wait and lure them with food. So, when one of them escaped off the truck, and disappeared for a few minutes, we waited and took time to set up a little temporary fence along the path he took to escape! Then when he returned we tempted him with food and when we got him close to the path, he picked up his scent, and probably his brother’s scent, and went right back in the way he come out! Except that instead of going back on the truck, he followed his brother’s scent and followed him in to their new pasture. Which by the way is where the Bucks and Ducks used to be, and now the Pigs are housed in their pasture, and are living in the old Buck Pen! Don’t worry though… we still have the Bucks, and the Ducks, and they too have new pastures!

More on that in a future video!