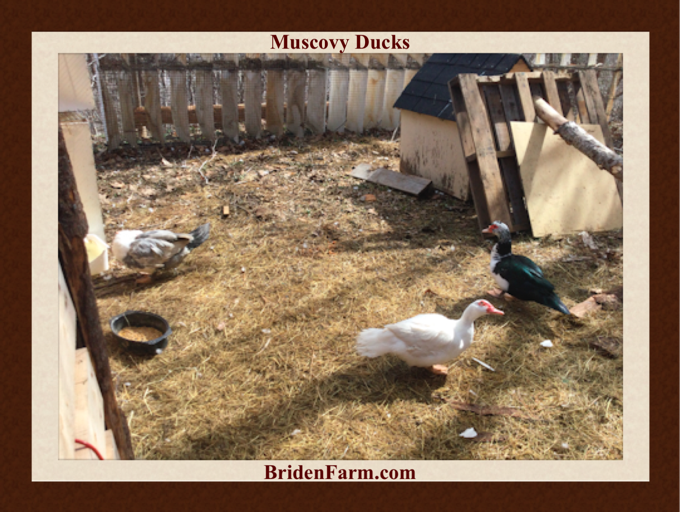 Truth be told, I love our Muscovy Ducks! However, they can be interesting! We got our first three, two Drakes and a female, Duck, as part of a rescue when we were told of someone who had some Chickens and Ducks they couldn’t afford to feed. We’ve since traded one of the Drakes for four Rabbits! Male Ducks will fight over the female when mature, so if you only have a female or two, you’re best off to keep just one male, Drake.

After rescuing the first three Muscovy, we ended up with another female, she’s a beauty, with a Black Back with a Teal Green Sheen! She come to us after her flock was attacked and after a somewhat convoluted journey. So, when we got her, she was very antisocial, not that Muscovy Ducks are ever overly social with their Humans! She hissed and shied away when we’d go to feed and water her. So, we kept her in a pen for a week as we got to build trust with her. Then, at night, we moved her out to the Duck Pen with our other Duck and the Drake.

The next morning when we let them out, to range in their pasture, the Black Back Duck went over and, to keep this family rated, spent some alone time with the Drake! She then waddled over to have something to eat and drink. She then said, “I’m outta here!” And scaled the Five foot fence with at least three feet clearance and I’m sure she felt a real sense of accomplishment until she looked down! See, the fence she went over is on the Cliff, about 80-100 feet above the West Branch of Bear River! I think I heard her scream Muscovy, like an Amazon Warrior Princess, as she not only scaled that fence, but braced herself, and set her wings for the downward spiral!

Honestly, we weren’t sure she’d make it!

But, make it she did, and then she discovered she liked her freedom! No need for people, nor store bought feed, or fancy housing! Not as long as She could spend her days traveling the River and sitting on a rock in the River at night! The whole time, managing to avoid being recaptured!

We tried for the better part of two days to capture little miss black back Muscovy Duck! No luck, we called, we left food, we tried to lure, we chased, and did everything we could to get her to come back or catch her and bring her back! No Luck!

Finally, our friend Joe, came to our rescue and He and I were able to corner her and caught her and brought her home. Since Joe had experience trimming flight feathers, we got him to show us and he did one duck and I did the other. The male, the Drake, he’s to heavy for his body to support him in flight so we only had to do the two Ducks. It’s not something I like to do, oh it’s easy enough, but It’s just that I’d rather have them keep their flight feathers as it helps protect them from predators… but sometimes we have to protect them from themselves!

So, after seeing that Black Back Beauty take flight, scale the fence with ease, and then I’m sure I heard her scream Muscovy! As she plummeted to the River! I ask You…

Muscovy! Is That A Curse Word?

2 Replies to “Muscovy! Is That A Curse Word?”