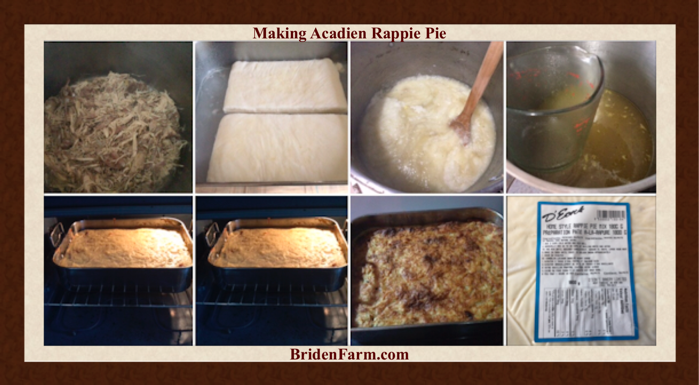 This has been a hectic week, three days ago we processed some of our Roosters. Then took the meat from two birds and cooked it in a pot on the Kitchen Wood Stove. Once that was done we separated the meat from the bones. For Making Acadien Rappie Pie at Briden Farm.

Now, You may be wondering how to make Rappie Pie, or even what Acadian (Acadien) Rappie Pie is? For those of us from South West Nova Scotia we grew up knowing, and even making, Rappie Pie! It’s a traditional Acadian (or in French, Acadien) Dish.

If You are from here, you are probably aware that there at least two different ways to make it! One is very labour intensive, the other still requires a lot of work! No real shot cuts, unless you buy a finished one!

So, I know someone is asking, “What the Heck is it?”

To best answer that question we defer to A Canadian Foodie’s Demystify Rappie Pie!

While A Canadian Foodie talks about the method used at D’Eon’s Rappie Pie, a 3rd generation family owned business, I dare say that the traditional, by hand, way is even more labour intensive!

Traditionally Rappie Pie is made by grating locally grown potatoes, removing the starch liquid from the potatoes, cooking and separating the meat from the bones, measuring and replacing the starch liquid with water, and baking it! The hardest part of the process, when doing it by hand is wringing the liquid starch from the grated potatoes! Often done ith a pillow case, or in some cases, especially in times past, employing a Spin Washing Machine! The Spin Dryer was used to spin the pillow case full of grated potatoes to remove the liquid starch!

You might say, “We Cheated”, but really we did it the smart way and got a Rappie Pie Potato Mix from D’Eon’s Rappie Pie. It saves hours of grating potatoes and maybe even a few finger tips! With the final product being nearly as good as the traditional method! Less the Finger Tips! 😉