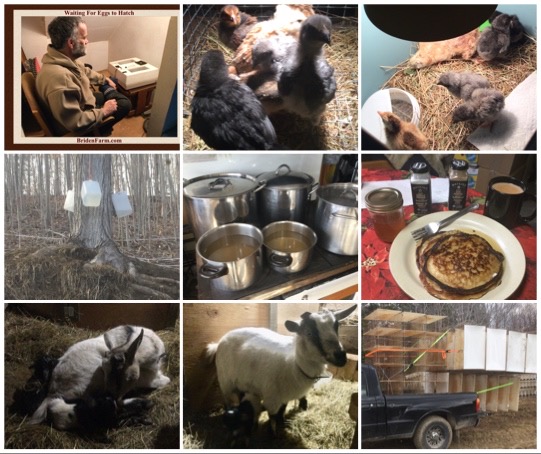 Now, I know that our closest friends and supporters know that we’re always crazy! Lately though, especially over the past seven weeks, it’s been crazy busy!

On the 22 February we had eggs hatching in our incubator and we had been tending them for three weeks prior! So really, I guess it’s actually been more like 10 weeks of Crazy Busy here at #BridenFarm

Soon after the Chicks hatching, we began gathering Sap and Making Maple Syrup! That of course kept us busy for a few weeks! We kept it small, mainly just for us, as this was our first Maple Syrup Season in a few years!

Then, by the end of March, Nanna had her Kids! Kidding Season is a fun, but stressful time of year with its own set of demands. So, March just flew by, and now we’re mid April!

The past week and a half we’ve been hauling 200 mink cages home to disassemble and use the wire for Fencing! It should be enough to fence about two acre as of pasture land.

Oh, and somewhere in there, a friend suggested we suggest Chicken TV at Briden Farm as a series for Eastlink’s Community TV. To which we did have a reply! Now, it’s not for a Series, not yet anyway, but Michael MacDonald, producer with Eastlink Community TV did contact us and come out to do a feature on us for East Link Magazine! (Air Date TBA).

Now, most recently we’ve made some changes, buying selling, and swapping out some of our livestock, details of which are to involved to list now, but we will cover it all in future Blog Posts! We do have some exciting new additions and we’ll tell You about them in upcoming Blog Posts!