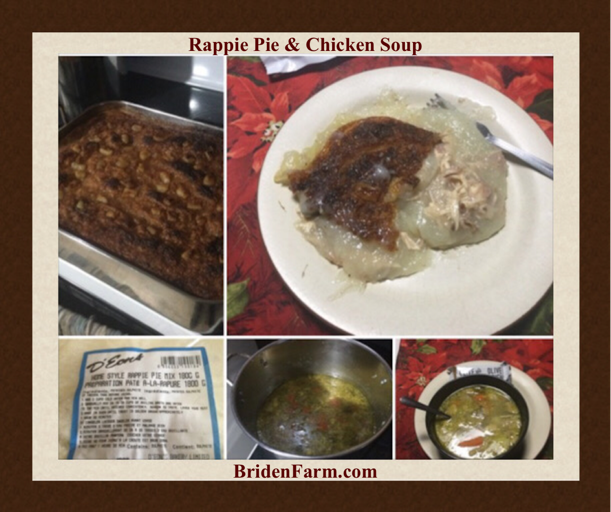 Two things that make a Winter Day a little warmer, and a Winter Storm more bearable, are Rappie Pie and Chicken Soup! Today we made both!

We were recently given four roosters, and yesterday we processed three of the four! I made a mistake of looking at the beautiful feathers on the their and he’s looking for a new home now! Actually, I think we have found one for him already!

I know to some processing animals and birds for food may seem rather mean, but the truth is it’s part of survival and it’s part of farm life. Especially on a working farm.

Certainly the end result of our efforts helps make it a little easier! A life, any life, from the smallest to the greatest should never be taken lightly. Always with Thanks, reverence and respect, for the life taken, and the food provided. The sad fact is there are too many Roosters, and while every would like to keep them around it simply isn’t possible. In nature the males, the protectors often get killed by predators protecting the females, and around the farm when there’s to many Roosters they’ll attack and kill each other! So, in many ways, it’s more humane to process them! We give them the best life possible, for as long as possible, but when it comes time we dispatch them as humanely as possible and they help feed us!

Most people, who think this is cruel  or inhumane, don’t generally stop to ponder all these things when they pop into their local Grocery, or Deli, to grab a BBQ Chicken on their way home from their 9-5 job! However, on the farm, among farmers and their livestock, it all takes on a far more intimate approach! It’s a symbiotic relationship where we feed them, give them the best life possible, for as long as possible so that they can better feed us!

For us, one of the best ways to make use of these Roosters is to make Rappie Pie And Chicken Soup!